Realm of the Fisher King

Realm of the Fisher King 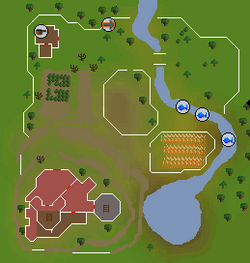 The Realm of the Fisher King is the name given to a small kingdom located on an inter-dimensional plane alongside that of Gielinor's.[source needed] The area plays a key role in the Holy Grail quest, in which the player is tasked with returning the grail to The Knights of the Round Table following Sir Galahad's choice to pardon himself from the order so he could become a Saradominist monk.

It can be accessed during the quest by blowing the Magic whistle underneath the Brimhaven watchtower, or may be revisited by the use of fairy ring code bjr.

The Kingdom could be characterized as a Littoral zone, as a river flows through the center of the area. It is notable for being of modest size, both geographically and population-wise. As such, the only building apart from the Grail Castle is a small shack-like dwelling with a cooking range inside of it.

The realm contains 3 fishing spots, a drove of sheep and rams, a cabbage patch, in addition to a wheat field and onion grove. As such, it is safe to assume that the community is self-sustaining via various forms of agriculture.

When first encountered during the quest, the kingdom is in a state of dilapidation brought on by the illness of the King. The landscape is dead and crops are failing to yield, leaving the sparse number of citizens in the kingdom unhappy. In addition to this, the bridge connecting two parts of the landscape is being occupied by the Black Knight Titan, preventing travel in and out of the grail castle.

After the Black Knight Titan is defeated, it is the player's duty to convince Sir Percival to succeed his father in the role of king. After much deliberation, Percival accepts the role as king and returns the landscape to a lush, green environment.