To start this quest, go to either of the quest start points adjacent to

White Wolf Mountain, as shown in the picture. Attempt to walk down the stairs in the building and a nearby dwarf will block you from doing so, saying that the tunnel is only for the use of the Mountain Dwarves.

Ask the dwarf if you could become friends ("If you were my friend I wouldn't mind it" ..."And how am I meant to do that?"). The dwarf will say that he wants you to win the fishing contest in the western town of

Hemenster, since the reward for the contest is a coveted gold trophy and dwarves aren't known to be good at angling.

They'll give you a

fishing pass for entry into the contest, before promising you access to the

tunnel shortcut underneath the mountain, should you manage to be successful.

Help from the champion

Once inside, beware of level 44

guard dogs, just west of the fairy ring, you will find a red vine - check the vine and collect 3 worms.

Hemenster, located across from the Ranging Guild south of Seers' Village.

Once there show Morris your

fishing pass and he will let you in.

Bonzo the contest fee to start the contest (5 coins). The Sinister Stranger will complain about a horrible smell and you will change places with him.

Fish at the spot by the pipes using the

red vine worms. You will catch a

giant carp, a unique type of fish that you can't catch normally, and that will be the prize winning fish.

After winning the contest and obtaining your

trophy, head back to the quest starting point and give the dwarf your trophy. 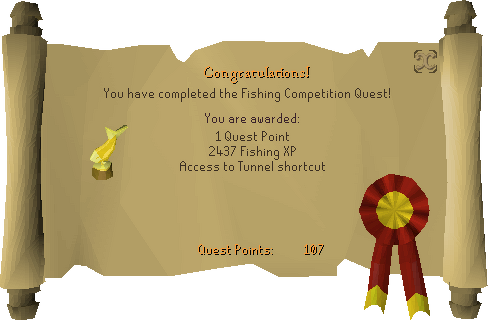 Completion of Fishing Contest is required for the following:

Retrieved from "https://oldschoolrunescape.fandom.com/wiki/Fishing_Contest?oldid=8760453"
Community content is available under CC-BY-SA unless otherwise noted.