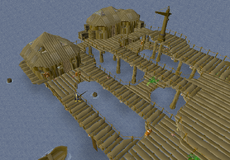 The Fishing Platform is located due east of Witchaven, in the ocean. Start the beginning of the Sea Slug Quest and talk to Holgart (with some swamp paste) to arrive here. After the quest, the player can get here by talking to Holgart or Jeb, depending on whether or not the player has completed The Slug Menace.

Not long ago, Witchaven was a busy town of trade in which its fishermen prospered. This came to a stop once this fishing platform was built: Witchaven lost its trade and began to fall into economic turmoil, though the fishermen of the platform prospered.

However, something even fishier has happened. The fishermen have become possessed by some strange sea slugs (and giant lobsters) hell-bent on freeing their beloved queen, and as the player discovers, their determination seeps into Witchaven in the Slug Menace quest.

The Fishing Platform is accessed by talking to Holgart or Jeb, depending on whether or not the player has completed The Slug Menace. Teleport to Ardougne and run east to Witchaven. Both NPC's are located slightly north of the town by the coast.

The fishing platform has 4 fishing spots to the very east of the ground floor. These fish can only be caught by bait fishing or net fishing.

There is not much of interest on the second floor, other than the terrified boy named Kennith rescued in the Sea Slug Quest. The player may speak to the 11 possessed fishermen here, though the player will find them to not be particularly talkative.

The platform is also the location for an emote elite clue scroll and a medium clue scroll.