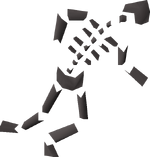 Fiyr remains are an item found and used in the Shades of Mort'ton minigame. To obtain these remains, the player must kill a Fiyr shade, located in the underground tomb. To enter the tomb, the player needs at least a bronze shade key, obtainable by killing and cremating a Loar shade. However, players need a silver key from an Asyn shade, to actually reach fiyr shades. Fiyr shades can also be encountered during Temple Trekking (in the Mort'ton section), which yield Fiyr remains which may give silver keys.

To burn the Fiyr remains, first place magic or redwood pyre logs on a funeral pyre, followed by the Fiyr remains, then ignite the pyre with a tinderbox. This will grant the player Firemaking experience (see table), and 100 Prayer experience. Burning a set of Fiyr remains is a possible challenge given by Sherlock in master clues.

Fiyr remains will always reward the player with a silver shade key, or some coins. Silver keys give unrestricted access to all areas of the shade tombs, and the silver keys open the silver rewards chests in the Fiyr area of the tombs, which give the best common rewards out of all the chests.

Players may only use Magic or Redwood pyre logs to burn Fiyr remains.

Retrieved from "https://oldschoolrunescape.fandom.com/wiki/Fiyr_remains?oldid=9048905"
Community content is available under CC-BY-SA unless otherwise noted.