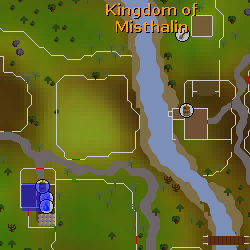 Fred the Farmer is an NPC that features in the Sheep Shearer and Cold War quests. Players can find Fred at the farmhouse north-west of Lumbridge, south of the windmill and to the west of the Lumbridge sheep pen. His farm is where you can find onions, which can be hard to find, especially for non-members.

If the player talks to him and says that they have seen the "Thing" (which is actually just two penguins), he will start to go on about grabbing chickens and running to the hills. In the end, the player will say that it is two penguins disguised as a sheep. He will ask if the player is feeling alright.