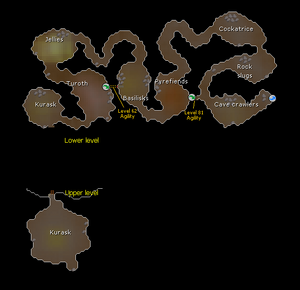 The Fremennik Slayer Cave is a cave located south-east of Rellekka, featuring monsters that can only be killed by those skilled in the Slayer skill. The monsters get progressively harder as the player goes deeper into the cave.

Many player's mistake the Slayer cave for Lalli's house nearby and are thus unable to get in. Travel a bit farther eastward and that is where the cave is located.

Note that players cannot set up a dwarf multicannon within the dungeon.

There are several ways to reach the cave:

Note: Everything but the Kurasks and Cave Crawlers are passive (although the Cave Crawlers are only aggressive to players with a Combat level of 46 and below). Cannons cannot be used in this cave because the air in the tunnel is too "humid".

This cave contains several slayer monsters, each with its own chamber.

Retrieved from "https://oldschoolrunescape.fandom.com/wiki/Fremennik_Slayer_Dungeon?oldid=8692304"
Community content is available under CC-BY-SA unless otherwise noted.