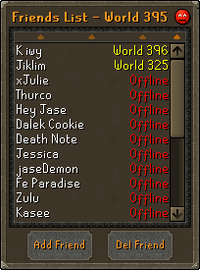 If a player meets one of his/her friends ingame, the friend's character will be represented by a green dot on the minimap in the upper right corner of the screen, instead of a white dot like most other players.

Friends lists aren't always used for contacting or keeping track of friends, some players might add another player's name to their friend list to spy on them, although this would only be possible if the other player had private chat set to 'on'.

Colours of the names

Retrieved from "https://oldschoolrunescape.fandom.com/wiki/Friends_List?oldid=156536"
Community content is available under CC-BY-SA unless otherwise noted.