Note: To obtain the ring of charos(a), you need only complete the first few steps of this quest.

To start the quest, go to the kitchen in

Varrock Palace, and then go east and then south into a fenced garden where

Queen Ellamaria is. Speak to her and she will hand over a

Throughout the quest the player should have these items present in their inventory.

Players should then get the

ring of charos obtained from

Creature of Fenkenstrain, head for

Draynor Village, and talk to the

Wise Old Man. Be careful, if you have more than one ring of charos in your inventory, the others will disappear. He will tell a story about

Queen Ellamaria before she was married to

King Roald, as well as the origin of the ring of charos. Give the ring to the Wise Old Man, after which he will ask seven questions to test whether the player is capable for the possession of an activated ring. Note that if you answer the first six questions correctly, the seventh question can be answered in any way. The questions are below, with the correct answers in bold:

1/7: Two goblins are fighting over the colour of their armour. What do you do?

3/7: Are you enjoying your experience of Farming?

4/7: A dwarf asks you to put on a silly golden helmet so that you can be fired from a cannon into a wall. What do you do?

5/7: You meet Pkmaster0036 in the wilderness who asks you who is the greatest player killer in the world. How do you answer?

6/7: Queen Ellamaria orders you to go on a foolish quest without any offer of reward. What do you say?

7/7: A Draynor bank guard asks you if you've seen any suspicious characters lately, because the bank has been robbed. What do you say?

After answering the questions correctly, the Wise Old Man will enchant the ring of charos and return it to the player. The player will need to wear the activated ring (shown as "ring of charos(a)") and use the dialog with "(Charm)" to persuade most of the

NPCs the queen asked to find.

Note: Players can visit the NPCs in any order. Also, note that when crops you plant for

Kragen fully grow, you will receive a message in your chat box. The seeds for these NPCs must be planted after talking to them. Using an

amulet of nature can be very helpful for this quest.

Items required: The ring of charos(a), farming equipment and a marigold seed.

Draynor Village, north of the cabbage patch. Talk to the gardener

Elstan asking if he has any Delphinium seeds to spare. Select the 'charm' responses until he asks you to plant some

marigolds. Agree to his request without using the "charm" option.

After speaking with Elstan, the player must grow marigolds in the nearby

flower patch from seed to flower. In exchange for the harvested marigolds, Elstan will hand over the

delphinium seeds. If you lose these seeds, speak to Elstan again, and he will provide you with more.

onions. Agree to her offer without using the "charm" option.

After speaking with Lyra, the player must grow onions in a nearby

When the onions are fully grown, speak to Lyra again. She will give you three

pink orchid seeds for your effort.

Recommended: Compost/supercompost/ultracompost and a plant cure.

cabbages. Agree to his offer without using the "charm" option.

After speaking with Kragen, the player must grow

cabbages in a nearby

cabbages are fully grown, speak to Kragen again. He will reward your efforts with four

Items required: Ring of charos(a), a gardening trowel, secateurs and a filled plant pot (can be bought from Vanessa next to the allotment farming patch north of Catherby).

Recommended: A Camelot teleport and an amulet of glory (for Edgeville teleport), or having started The Giant Dwarf.

Catherby farming patch and talk to

Dantaera. Charm her, and Dantaera will let you cut a branch of the

white tree, which is on the top of

Ice Mountain (not to be confused with White Wolf Mountain), near the

After talking to Dantaera, the player should prepare a

filled plant pot, a pair of

gardening trowel and a

watering can with water.

Edgeville and head west, to the top of Ice Mountain and find the white tree. Use the pair of secateurs on the tree, and the player will get a

white tree shoot. Use it on the plant pot with soil (you will need a trowel) and water it. After a while, the branch will grow into a sapling and is ready to be planted in the tree patch in

Players should not throw away or destroy the ring before being told by Althric to do so. The steps mentioned in this section should be followed strictly.

Items required: Ring of charos(a) and a fishing rod (optional)

Recommended: An amulet of glory (for Edgeville teleport) or combat bracelet to teleport right to it.

Go to the garden at the northern side of the

Edgeville Monastery, with the

Ring of charos(a) equipped. Try to take the rose seeds, and

Brother Althric will stop the player. Try to charm him, and he will claim the player is wearing an "evil talisman" and demands that the player throw it into the well in

Edgeville, or simply destroy it. Players should not throw away or destroy the ring before being told by Althric to do so.

Note: It is suggested that the player should go to Edgeville and throw the ring in the local well. Otherwise, the player will have to go to

Dr Fenkenstrain again in order to recover the ring. He is located at the top floor of the castle.

With the ring thrown away or destroyed, players can go to the monastery and attempt to take the seeds again. This time, Brother Althric will be pleased and will allow the player to take the rose seeds. Players need all three kinds of rose seeds -

If the player has thrown the ring into the well, the monk will mention a method to recover it. Players should get their own

barbarian rod do not work) and use it with the well in Edgeville. It might take several tries, but the ring can eventually be recovered.

Bernald, The Toad and Chicken in Burthorpe

Items required: Ring of charos(a), a rune/pure essence, a pestle and mortar, 2 plant cures and a hammer.

Recommended: A games necklace (for teleport).

Burthorpe (you can use a

games necklace or the

Minigame Group Finder). Go to the

Toad and Chicken pub, and enter the garden on the eastern side. Talk to

Bernald and charm him. He will tell the player that his vines are dying and needs a cure. Use one plant cure on the vine, and you will find it's not working. Talk to Bernald again, and he will instruct you to find

Head south to the

tree patch in Taverley (near the entrance gate dividing the

free-to-play areas) and speak to Alain. He will provide a method of enhancing the

plant cure's power. Do not use the "charm" option in dialogue, or he will refuse to help you.

After speaking with Alain, use a

pure essence to crush the stone into

rune shards, and then use the

pestle and mortar on the shards to make some

rune dust. Use the dust with the remaining plant cure potion to get a

strengthened plant cure. Bring the potion back to Bernald in Burthorpe, and use it on the diseased vines. The vines will now be cured.

Talk to Bernald, and he will give some Burthorpe

vine seeds. If you lose these seeds, talk to Bernald, and he will provide you with more.

Recommended: A Lumbridge and Falador teleport.

Note: The plants take a while to grow (the white tree being the longest time), so it is recommended to

do the gardening now and to get the statues while the plants are growing.

Players can talk to

Ellamaria and ask about getting the statues. She will provide a

trolley for the player to push or pull the statues.

teleport is recommended for players to get to the statues' original places.

Statue of a former king, Lumbridge

Lumbridge; then, walk out of the

castle. Examine both statues, and use the

trolley on the one described as the statue of a "king" (should be the one on the south side).

Push or pull the trolley across the bridge directly outside the castle. Once the trolley is on the other side of

River Lum, the scene will immediately change to the north backyard of

Varrock Palace. Push or pull the trolley to the east, and then south into the

Be careful not to get the trolley stuck or you will have to logout and log back in to reset it.

if the statue at any point gets "recaptured" (if you take too long to place it on the spot for the statue) , you can get another trolley from the queen and you have to go back to Lumbridge and get statue again.

The statue should be placed on the eastern side slot against the wall. When the trolley is pushed beside the spot, use the "place" option to place the statue, and the trolley will return to the player's inventory automatically.

Billy and Bob (link)
The track that plays during the cutscene.

Falador, and use the

trolley on the statue; a

PKMaster0036 while the player tries to push the statue onto the trolley.

After the cutscene, the player should pull or push the trolley out of Falador as soon as possible. If the player uses too much time, the guards will discover the statue has been stolen, and the player will have to start it all over again.

Once the trolley is out of Falador, the scene will immediately change to the north backyard of

Varrock Palace. Again, push or pull the trolley to the east, and then south, into

The statue should be placed on the central slot. When the trolley is next to the spot, use the "place" option to place the statue, and the trolley will return to the player's inventory automatically.

Items required: Ring of charos(a), farming equipment, two buckets of compost and all seeds and saplings from earlier sections. Note: There is no tool leprechaun in the Garden.

You will not need to add

compost to the allotments in the garden, nor water any of the patches. Use the

rake to wipe out the

weeds in all farming patches, and plant the seeds/sapling to where they should be placed. However, you will need to add compost to the orchid pots before planting them. The plants in Ellamaria's Garden take 10-15 minutes to grow and cannot die. Make sure you've watered your White Tree Shoot or it won't work when you try to plant it. After all patches are fully grown and the statues are in place, talk to

Ellamaria, and she will ask the player to get

King Roald. Go to King Roald, located in the south-east side of the

Palace on the ground floor.

Touring the Garden (link)
The track that plays during the cutscene.

Talk to him while wearing the ring of Charos (a), and charm him when possible (or continue on without charming for an amusing conversation). A

cutscene will play with the Queen giving him a tour. Don't open any interfaces after the end of the cutscene or walk away from the queen, otherwise you will have to fetch the king again.

cutscene, the queen will reward the player and the quest is complete. Congratulations! 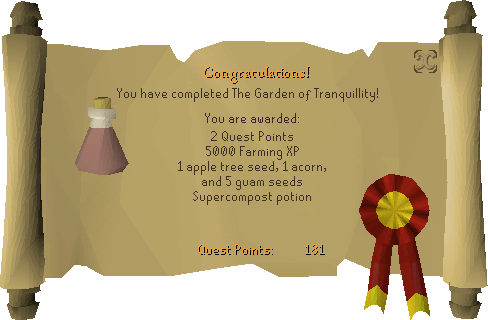