A beer-drinking dwarf who is - for once - not totally drunk. 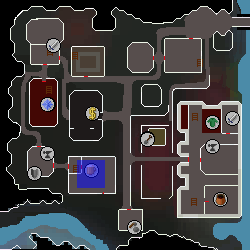 Gauss is a dwarf that lives in the dwarven city of Keldagrim. Like most dwarves, he is particularly fond of alcohol.

Despite spending much of his time drinking, Gauss is always in a good mood, and does not seem to suffer any immediate problems from consuming ale. He is fairly wealthy, and usually visits the well-known King's Axe Inn, Keldagrim west's most popular pub. If spoken to, Gauss will ask the player for a toast, although there is no real reason for it.

If the player has any type of beer in their inventory, they will toast Gauss, and then drink the beer. There is no advantage to doing this, although a short animation is displayed. There is no disadvantage either, other than using up a beer; beer drunk in this interaction will not reduce (or improve) the player's statistics. Note if you are carrying wine rather than beer, you will accept the offer but Gauss will then refuse to toast, citing the difficulty in getting wine stains out of a beard.

Gauss also plays a small role in the quest Forgettable Tale.... During the quest, players must toast him. If they do this, he will give them a kelda seed, necessary to grow Kelda hops.

Retrieved from "https://oldschoolrunescape.fandom.com/wiki/Gauss?oldid=8085721"
Community content is available under CC-BY-SA unless otherwise noted.