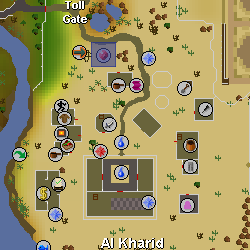 The gem trader runs the Gem Trader stall in Al Kharid. He buys and sells sapphires, emeralds, rubies, and diamonds and their uncut versions as well. His shop isn't frequently used due to the predominance of the Grand Exchange, where sellers can receive more money for the gems, cut or uncut. In the Family Crest quest, he directs the player to Avan at the Al Kharid mine.

Prior to the release of the Grand Exchange pre-late 2007, it was common for the gem trader to have a fairly full stock on free-to-play worlds as his shop was the easiest way for newer players to sell their gems. Newer players were also able to make small profits by buying uncut gems from the gem trader, cutting them, then selling back for a higher price.

Retrieved from "https://oldschoolrunescape.fandom.com/wiki/Gem_trader?oldid=8085734"
Community content is available under CC-BY-SA unless otherwise noted.