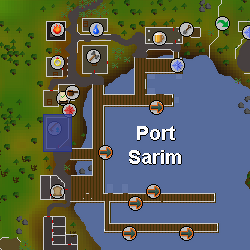 Gerrant is the owner of Gerrant's Fishy Business in Port Sarim. He is seen wearing a white apron and toting a fishing pole around and he also wears a beige fishing hat. A white apron respawns in his shop. He sells feathers, fishing bait, fishing poles (bait and lure), harpoons, lobster pots, and all raw free-to-play fish. In the Heroes' Quest, Gerrant teaches the player how to make an oily fishing rod.

He is also the person you talk to during a level 3 clue scroll bearing the following text: "If a man carried my burden, he would break his back. I am not rich, but leave silver in my track. Speak to the keeper of my trail."