Dropping this skull here will destroy it! Are you sure you want to drop the skull? 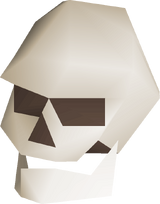 The ghost's skull is a quest item used in The Restless Ghost. It is found in the Wizards' Tower basement by searching the altar.

After searching the altar a skeleton will appear. Killing it is not necessary, and you may run if you want to. Putting the skull back into the restless ghost's coffin will complete the quest.

Retrieved from "https://oldschoolrunescape.fandom.com/wiki/Ghost%27s_skull?oldid=9050722"
Community content is available under CC-BY-SA unless otherwise noted.