Important advice: Canifis and Port Phasmatys are located very out of the way compared to the rest of Runescape. If you are missing an item, it means a lot of walking to find it! It is highly, highly recommended you have the Ghostspeak amulet, coins, bucket of milk, silk, spade, oak longbow, closed fingered gloves, and log/axe in your bank before starting the quest. It's also suggested you buy 3 Red, 3 Blue, and 3 yellow dyes off the Grand Exchange before starting, but if you are willing to make an extra trip this is not required.

Note: 10 Ecto-tokens are for entering Port Phasmatys, and 25 are for Dragontooth Island later on in the quest.

Note for Ultimate Ironman: if you don't have enough inventory space, it's possible to do this part with only 1 bucket and 1 pot, but it will take 7x as long to gather the Ecto-tokens. Try to bring as many as you can carry.

Items required: Ghostspeak amulet and 4 Ecto-tokens. Note: Port Phasmatys has a bank on its coast to the south-east, which can be accessed even without your Ghostspeak amulet. Make certain you hold onto your Ectotokens.

The Old Crone and Nettle Tea

Items required: A tinderbox, logs, gloves (must be closed-fingered), a bowl of water (bowl can be bought and filled during quest), and a bucket of milk.

You can get the book, robes, and manual in any order, but the order below is the most time efficient.

Items Required: Around 400 coins and an oak longbow.

Items Required: Bucket of slime (can be purchased during quest) 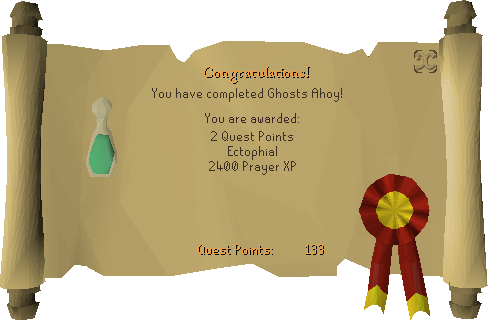 Retrieved from "https://oldschoolrunescape.fandom.com/wiki/Ghosts_Ahoy?oldid=1738302"
Community content is available under CC-BY-SA unless otherwise noted.