Old School RuneScape Wiki
Register
Don't have an account?
Sign In
in: Quest NPCs, Non-player characters, Tale of the Righteous,
and 2 more 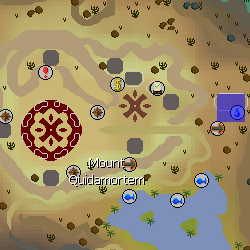 Gnosi is found with the Varrock Museum expedition on Mount Quidamortem, along with the Natural Historian, Historian Duffy, and the Mountain Guide.

During Tale of the Righteous, she accompanies Historian Duffy and the Natural Historian into the cave west of the Mountain. Upon discovering the unstable altar, she will tell you the reason Xeric ruled Great Kourend unopposed was because of the power of the Dark Altar, and that he came to Mount Quidamortem to construct the Chambers of Xeric after his exile.

Gnosi believes the reason Xeric survived in Quidamortem is the unstable altar nearby, which appears to give off the same power as the Dark Altar. She further states that it was created to amplify the Dark Altar's power, allowing it to reach areas it previously could not. As it is still giving out power, Gnosi wonders if Xeric had used it to extend his lifespan.

After the quest, she remains in the cave to further study the temple.

After completion of Tale of the Righteous: