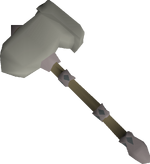 The granite hammer is a warhammer dropped by the Grotesque Guardians that can be found on the Slayer Tower's rooftop. Level 50 Attack and Strength are required to wield it.

It acts as a rock hammer in the inventory, but will automatically smash gargoyles when it is equipped.

Unlike standard warhammers, the granite hammer features an attack speed of 6, matching the speed of more commonly used melee weapons (such as scimitars and abyssal whip), which results in significantly more damage over time. Thus, in terms of overall power, the granite hammer falls roughly between the rune scimitar and dragon scimitar.

The granite hammer has a special attack, Hammer Blow, which consumes 60% of the player's special attack energy, and deals an attack with 50% increased accuracy, while guaranteeing 5 additional damage to that attack.

Even if the special attack misses, the target will still take a minimum of 5 damage from it. This excludes NPCs that are immune to normal forms of attack, such as vyrewatch and slayer monsters the player does not have the Slayer level to attack.

Retrieved from "https://oldschoolrunescape.fandom.com/wiki/Granite_hammer?oldid=8215207"
Community content is available under CC-BY-SA unless otherwise noted.