The hood worn by only the most experienced players. 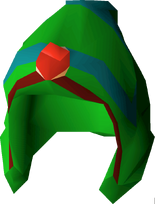 Should players lose the hood, they may reclaim it from Mac for free.

Retrieved from "https://oldschoolrunescape.fandom.com/wiki/Guthix_max_hood?oldid=8688121"
Community content is available under CC-BY-SA unless otherwise noted.