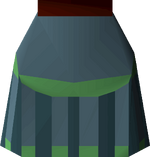 The plateskirt requires 40 Defence to wear and cannot be made using the Smithing skill.

Players can obtain a Guthix plateskirt as a reward from completing a level 3 Treasure Trail or from trading with other players.