Chieftain of the Mountain Tribe

The Chieftain of the mountain camp. 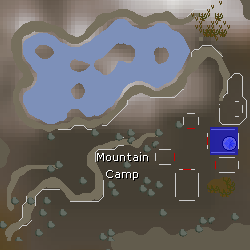 Hamal the Chieftain, also known as Hamal, Son of Wulfgard, rules the Mountain Camp. Players should talk to him to start the Mountain Daughter quest. His daughter, Asleif, disappears and you have to find her. It is revealed that she was killed by a man posing as The Kendal. Hamal also gives players back their bearhead if they have lost it.

At the start of the quest, he says that his tribe broke off because they want to be closer to nature, and while they share their view of runestones, they still use magic, and said that "Their Seer is an affront to the gods!", to which the player reply "And you haven't even seen what he did to his house!" Referring to the puzzle encountered in The Fremennik Trials.

Retrieved from "https://oldschoolrunescape.fandom.com/wiki/Hamal_the_Chieftain?oldid=7773723"
Community content is available under CC-BY-SA unless otherwise noted.