A jester from the west. 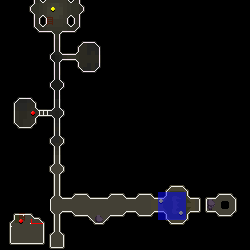 Hameln is a jester who can be found in the dungeon beneath the town of Slepe. He traveled to Slepe after hearing about it in a poem at the College of Bards in Varlamore.

He is the traveling companion of Hanchen the Hound and the Painted One. According the Hameln, they have traveled eastward to arrive at Slepe and have crossed many oceans to do so, implying they come from the continent of Zeah.

Players must speak to him in order to receive Buried alive.

Retrieved from "https://oldschoolrunescape.fandom.com/wiki/Hameln_the_Jester?oldid=6539930"
Community content is available under CC-BY-SA unless otherwise noted.