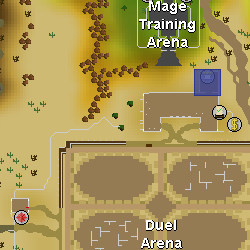 Hamid is a monk at the altar in the medical centre of the Duel Arena. He is spoken to during a certain clue scroll to receive another scroll or reward. Hamid says he came to the Duel Arena to watch the nurses, which is slightly odd for a monk. He comes from the monastery north of Falador.

Retrieved from "https://oldschoolrunescape.fandom.com/wiki/Hamid?oldid=7773719"
Community content is available under CC-BY-SA unless otherwise noted.