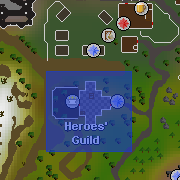 The Heroes' Guild mine is a mine located in the basement of the Heroes' Guild. Players must have completed the Heroes' Quest to enter. It is notable because it contains two of only four Runite ore rocks found outside of the Wilderness, which has a total of six. The mine features: 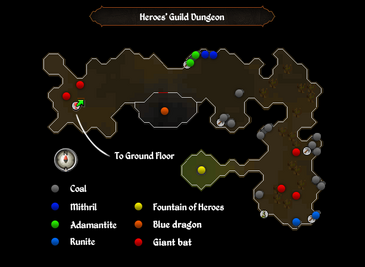 There are several non-aggressive giant bats, as well as a caged blue dragon. The nearest bank is in the Rogues' Den or the Warriors' Guild, though a teleport may be a better idea if using a Games necklace to return to Burthorpe.

Retrieved from "https://oldschoolrunescape.fandom.com/wiki/Heroes%27_Guild_mine?oldid=8213289"
Community content is available under CC-BY-SA unless otherwise noted.