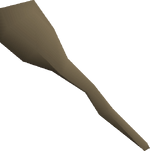 The hill giant club is a two-handed melee weapon requiring 40 Attack to equip. It is currently the best-in-slot weapon for crush bonuses in free-to-play, possessing very similar stats to a rune 2h sword but with the slash and crush bonuses swapped, though the rune 2h has a slightly higher slash bonus compared to the crush bonus of the club.

It can be obtained as a drop by killing Obor the Hill Titan. The only way to gain access to Obor's Lair is to kill Hill Giants until they drop a giant key.