View source
watch 02:58
No Man's Sky Update - The Loop
Do you like this video?
Play Sound
RSCRS
This article is about the quest. For the item, see Holy grail (item).
Old School RuneScape uses the British convention for floor numbering: Ground floor, first floor, etc.

quest is the second part of the

Camelot quest series, where you must help

holy grail. The grail is found to be missing from its original location in

Fisher King in the

King Arthur, and he will tell you about the holy grail.

Camelot Castle. Go up the staircase in the main part of the castle, and go to the south-east room (not the tower); he will appear once you enter. He tells you to go talk with someone on a "holy island" (

Now, go to Port Sarim, and speak to the monks on the pier to sail to Entrana. Remember not to take any weapons or armour, or the monks will not grant you access to Entrana. Speak to the high priest of the church. He will say the holy grail is no longer here. Then, a strange old crone will appear and say that the Fisher King is in trouble. You will need to find six stone heads around the world, and go to where they point when you have a magic whistle.

Return to Camelot (you can teleport or use a combat bracelet to teleport to the Ranging Guild); then, go to Galahad who's located in a house west of McGrubor's Wood. Tell him you're looking for an item from the Fisher Realm, and he will reluctantly give you a holy table napkin, a souvenir he took from the Fisher Realm.

Now, head to the top floor of Draynor Manor into the southern room by Professor Oddenstein. You need to have the holy table napkin with you, or you can't see the whistle respawn. Pick up two magic whistles.

armour (last 4 are optional but highly recommended). A

Melee users the ability to defeat the titan without suffering damage. Bring

anti-poison if you're under level 41

Now, get ready to fight! The fastest way to Brimhaven is using a scroll of redirection on a teleport to house tablet and directing it to Brimhaven. The second best method is teleporting to Ardougne and talking to Captain Barnaby in southern Ardougne, on the docks. You can also take a charter ship to Brimhaven from Port Sarim and the Catherby docks, this costs 1,600 gp. You can also use your amulet of glory to teleport to the Karamja Volcano and run west, or use fairy ring code BLP to go to Tzhaar city, inside the volcano.

After arriving in Brimhaven, head north-west of the town, where the goldmine is. Look for a guard tower north of where the gold rocks are. Go under the tower and blow one of the magic whistles, and you will be teleported to the Fisher King's Realm. If you are below Combat level 41, be sure to bring Antipoison because there are level 20 poisonous scorpions.

Now, you need to get across a bridge to speak to the Fisher King. The Black Knight Titan stands there and won't let you through without a match. The Titan can hit up to 15, so be prepared. The titan must be killed with the Excalibur blade only, although you may use other weapons to bring down his health (it is possible to kill him with a different weapon, however you must quickly switch to Excalibur). The titan has no specific weakness to an attack style, but he is resistant to Ranged and Magic attacks, hence it is recommended to use Melee. If the finishing strike is not from the Excalibur, you will have to face him again. (If you have a low level combat, it is possible to use the hit-and-run method, as the titan does not move. You can simply hit him once and then walk a square back.) If you use a halberd, you can just defeat him from a block away. (You can safe-spot with magic, stand 4 units east, and 1 unit north from the titan.)

After you have killed the titan, cross the bridge and head south along the river till you find a fisherman.

Speak to him and ask how to get inside the castle. He will tell you that you need to ring a bell. Head to the castle (south-west from the fisherman), and there will be a grail bell on the ground in front of the entrance. Ring it, progress through the dialogue, and you will be inside the castle.

Head upstairs and speak to the Fisher King. Choose every chat option because if you miss one, you may have to kill the titan again. He is very sick and wishes to see his son once more. The son's name is Percival, and he is a knight of the round table. Now, blow your whistle again to be teleported out, or teleport directly to Camelot if you have the runes. Although possible, you should NOT use the fairy ring BJR, if used before talking to Percival, you will NOT be able to grab the grail. (You will be in the Fisherman Realm era with Percival as King, however.)

Ardougne teleport (all teleports are optional but highly recommended) or

Head to Camelot, and speak to King Arthur. Though he does not know where Percival is, he gives you a magic gold feather, which points to the gold boots Percival was wearing.

Blow on the feather, and it will guide you towards Goblin Village. Teleport to Falador, and head north. Once at the Goblin Village, head into the east house and open (do not just prod) the sacks, and you will find Sir Percival. Tell him that his father wishes to see him. Percival doesn't know how to get to the castle; if you have a magic whistle in your inventory, you will automatically give it to him when the conversation ends.

Head back to the Fisher King's Realm like before (you don't need to fight the Black Knight Titan this time). You may now also teleport there using fairy rings (BJR) after finding and giving him the whistle. Now, head to where the Fisher King should have been, and you find Percival as a king.

Head back downstairs, go up the staircase on the east end of the castle, and continue up the ladder. Now, you can take the holy grail. Then, blow your whistle.

Head back to King Arthur in Camelot, and talk to him. 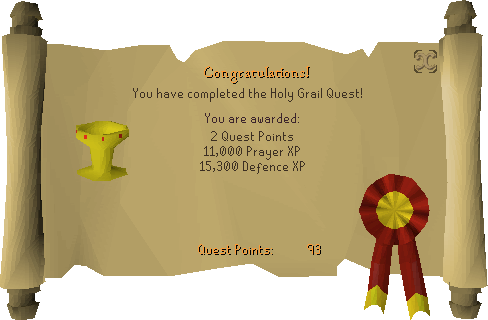 Completion of Holy Grail is required for the following: