Start a Wiki
CRS
This article is about the drunk involved in the Biohazard quest. For the ingredient used in ale making, see Hops. 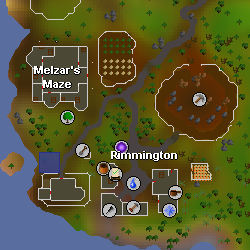 Hops is one of the three henchmen you use in the Biohazard quest to deliver the dangerous chemicals to Varrock. During Biohazard, you need to give him the sulphuric broline.

If you talk to him on a free-to-play world, he will say "Hops don't wanna talk now. Try different world HIC!" If you talk to him after completing Biohazard, you will get a message in your chatbox saying "Hops doesn't feel like talking." In Rimmington, you can find him wandering around the small camp north of the chemist's house with Da Vinci and Chancy drinking a bottle of beer. In Varrock, you can find him swaying around at the Dancing Donkey Inn having yet another beer.

Retrieved from "https://oldschoolrunescape.fandom.com/wiki/Hops_(NPC)?oldid=9050470"
Community content is available under CC-BY-SA unless otherwise noted.