Horror from the Deep

Horror from the Deep

Horror from the Deep is an experienced quest revolving around the mysterious disappearance of Jossik, keeper of the Lighthouse near the Fremennik Province. As the title suggests, the investigations lead to the discovery of very dangerous creatures living beneath the lighthouse.

NOTE: Bring food due to the basalt platform having a high failure rate with low level agility.

Go down the iron ladder into the basement to find the door.

If you cannot see the colour changes very well, look at the chat box. Using the wrong attack does no damage to it. Also, you can safespot her by using the stalagmites in the room. If you do it right, you can get the mother stuck behind a stalagmite where you can stand behind and not lose any health points.

The best way to defeat her is to ignore the ranged and melee forms, since she has too high Defence against those attack types for them to be worthwhile. Use an air staff and switch spell types in the correct order.

The Mother can be safespotted by melee, and if you have a good enough weapon (e.g. dragon weapons), you can completely avoid all Ranged and Magic; you don't need food or decent armour, and you can wait until the orange stage repeatedly.

Protect from Missiles can be flicked as you safespot her, which will cause her to do no attacks at all. Bolt and Blast spells will tear through her, requiring no food at all.

She can detect Prayer, and will automatically use the opposite attack type when you use prayer. By default, she ranges at a distance and melees up close. Her melee attacks are stronger. 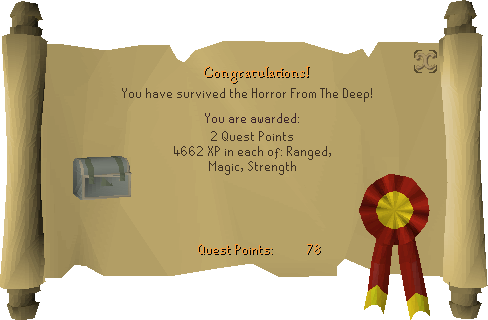