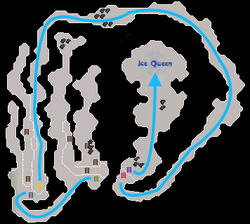 The Ice Queen's lair is a dungeon, located under the White Wolf Mountain. It plays a major role in Heroes' Quest, as the Ice Queen is located here. A pickaxe is required to access the lair. Level 50 Mining is required to remove the rockslide to gain access. Most players that come here slay the Ice Queen to obtain her ice gloves. If a player happens to lose their ice gloves, they may simply acquire a new pair by slaying the queen again.