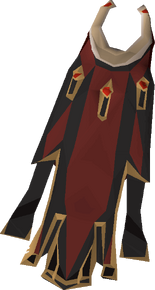 Like the other max cape variants (a max cape combined with another cape slot item), the imbued zamorak max cape does not have the max cape's stats or perks; it only acts as a cosmetic upgrade to the imbued zamorak cape. However, the cape can still be used to perform the skillcape emote.