In Aid of the Myreque is the third quest in the Myreque quest series. After discovering the secret group called the Myreque, the player must now help them move to a new location in Burgh de Rott, where they would be closer to the heart of their vampyre oppressors.

Warning: You need to be on regular spellbook to complete this quest, since you need to cast Lvl-1 Enchant.

Items needed: food you don't mind losing (5 pieces is recommended if running past ghasts, or 1 piece of food with full druid pouches), a hammer, a pickaxe, a spade, 1-5 buckets, 11 planks, 44 nails, 1 swamp paste. Keep at least 6 inventory spaces semi-free. If you have completed Shades of Mort'ton you can get the hammer and planks from the Mort'ton builder shop.

You now have access to the Burgh de Rott bank.

Items needed: a hammer, 2 steel bars, 1 piece of coal, 1 tinderbox, Efaritay's aid or a silver weapon such as the silver sickle(b), and some food for lower-levelled players. 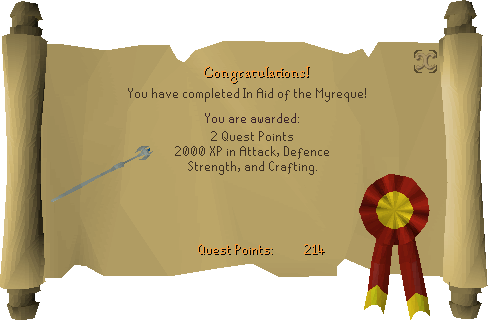 Completion of In Aid of the Myreque is required for the following:

Retrieved from "https://oldschoolrunescape.fandom.com/wiki/In_Aid_of_the_Myreque/Quick_guide?oldid=8688328"
Community content is available under CC-BY-SA unless otherwise noted.