These are plans for an invasion! 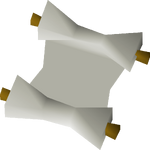 The invasion plans are an item used during the The Grand Tree quest. Players obtain it by using Glough's key on the locked chest in Glough's home just south of the Grand Tree.

Along with the lumber order, players should take this to King Narnode Shareen as evidence against Glough.

Troops board three fleets of battleships at Karamja

Fleet 1
Attacks Misthalin from the south.

Fleet 2
Groups at Crandor and attacks Asgarnia from the west.