The Jaldraocht Pyramid, also known as Azzanadra's Pyramid or simply The Pyramid (it was the first pyramid released), is located south of the Bandit Camp in the Kharidian Desert. It is a key location in the quest Desert Treasure, and upon completion of said quest, can be used by players to switch their Spellbook to Ancient Magicks or back. During the quest, players must use the main entrance of the pyramid to get in, which requires them to run past attacking creatures (see below) while dodging traps. The pyramid has four levels, each of which is larger in width than the last. Some players consider getting through to be of some difficulty, as the traps will send the player back to the entrance. After the completion of the quest, players may use the south entrance to return to the centre of the pyramid without frustration.

After completion of the Desert Treasure quest, players can buy the Ancient staff from Eblis for 80,000 coins. If they happen to lose it, they can buy one from another player or kill mummies inside Jaldraocht for another.

During the God Wars, many enormous battles were fought within the Kharidian Desert. Azzanadra, a powerful Zarosian Mahjarrat, was an active warrior who fought in the desert to protect the Zarosian groups who fled into the desert when Zaros fell. Azzanadra was incredibly powerful, and wiped out enormous armies on his own.

Because Azzanadra was nearly invincible, he was a great danger to the armies of Saradomin and Zamorak, and so a group of Zamorakians decided to bring him down. They cast a spell upon him which bound Azzanadra's power into four diamonds. The Pyramid may have been built to imprison Azzandra, although its architecture and the fact that it contains ancient Zarosian warrior mages buried in its catacombs indicates that it is likely a much older structure built some time during the Second Age by followers of Zaros.

During Desert Treasure, the player found the four diamonds and used it to release Azzanadra from the pyramid.

The fastest way to reach the Pyramid is to use the Jaldraocht teleport of the Pharaoh's sceptre. The second fastest way is by using a Camulet and teleporting just north west of the pyramid. A teleport to the Pollnivneach POH portal using a redirection scroll on a house tablet is the third fastest way. Alternatively, players could use a Ring of dueling followed by riding a magic carpet to Pollnivneach.

A map of the pyramid

The levels in the pyramid are numbered in the order the player encounters them in the Desert Treasure quest.

The exterior of the pyramid is not dangerous, other than the effects of desert heat. Heat is not a factor inside the pyramid, but almost all of the interior is dangerous, with level 138 Mummies roaming about, level 92 Scarabs occasionally boiling out of the floor, and level 92 mummies sometimes spontaneously popping out of sarcophagi. Also, on Levels 1-3, random traps in the floor occasionally open up underneath the player, depositing the player outside, next to the south side of the pyramid. (The scarab swarms, spontaneous mummies, and traps cannot be detected in advance.) The room containing the altar on Level 4, however, is safe.

It is recommended that players use weight-reducing items in the pyramid. This is important, as the floor traps are less likely to trigger for lighter players (20 kg or less) and will almost not trigger at all for a player with a weight of 0 kg or less. (Players with high Agility levels also avoid many of the traps.) The traps do not stop your forward motion, so opening your house options will prevent most if not all traps from triggering. Being attacked closes the options so be sure to reopen.

During the Desert Treasure quest, the player must enter the pyramid from its top. The outside entrance to Level 4 and the Ancient Magicks altar can only be used after the quest.

This level is the smallest in area, with the fewest mummies roaming about. The purple line on the map marks the route from the entrance ladder to the ladder to the next level. 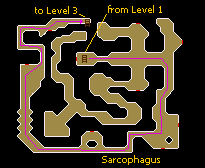 This level is the second smallest in area, with a few more mummies roaming about. The purple line on the map marks the route from the entrance ladder to the ladder to the next level. 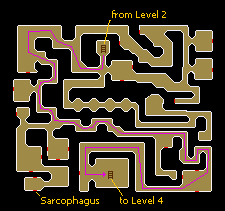 This level is fairly large in area, presenting more of a challenge to players traversing it. A significant number of mummies are roaming about. The purple line on the map marks the route from the entrance ladder to the ladder to the next level. 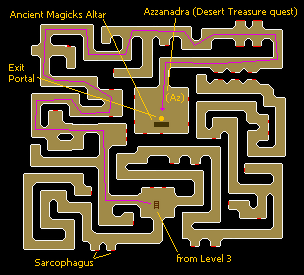 This level is quite large in area, with many mummies roaming everywhere but the altar room. The purple line on the map marks the route from the entrance ladder to the altar room. In the Desert Treasure quest, Azzanadra is in the altar room. The altar allows players to switch their spellbook between Ancient Magicks and the Standard spellbook. It does not, however, recharge Prayer points - instead draining them to allow the switch to the Ancient Magicks spellbook. A portal next to altar lets the player exit the room directly, depositing them outside the pyramid.

After the quest, Azzanadra is not in the altar room, and the room can be accessed directly from the entrance on the south side of the pyramid.

Retrieved from "https://oldschoolrunescape.fandom.com/wiki/Jaldraocht_Pyramid?oldid=8694534"
Community content is available under CC-BY-SA unless otherwise noted.