Start a Wiki
RS
This article is about the artefact found as part of the Varrock Museum minigame. For items of jewellery that players can wear, see Jewellery. 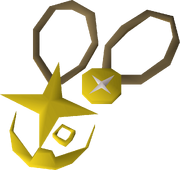 The jewellery appears to include a gold holy symbol and a gold tiara, both of which players can only make from silver. The jewellery also includes a gold ring and a strung gold amulet. Because it includes symbol to Saradomin, it is believed to be from the ruins of Saranthium as opposed to Senntisten, which was earlier and of Zarosian religion.

When players find this item, the message they see includes the word "jewelry", which is the American spelling of the word "jewellery". This goes against Jagex's usual policy of using British spellings in RuneScape.

It may be shown to one of the six archaeologists in the room to receive 5 coins, after which the player comments: "Must have been worth a lot in his days!"

Players might prefer to put it in the Storage crate instead, for a random reward, usually worth more than 5 coins.

Retrieved from "https://oldschoolrunescape.fandom.com/wiki/Jewellery_(item)?oldid=8691202"
Community content is available under CC-BY-SA unless otherwise noted.