It's a challenge from the Jogre champion! 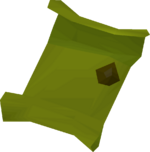 The jogre champion scroll is an extremely rare drop from jogres. It contains a challenge from the Jogre Champion.

By bringing this scroll to Larxus in the basement of Champions' Guild, players may fight the Jogre Champion as part of the Champions' Challenge minigame. During the fight, players can only use magic or melee attacks.

Retrieved from "https://oldschoolrunescape.fandom.com/wiki/Jogre_champion_scroll?oldid=8690883"
Community content is available under CC-BY-SA unless otherwise noted.