View source
watch 02:40
World of Warcraft: Dragonflight - The Loop
Do you like this video?
Play Sound
RSCRS

Jungle Potion is a short quest taking place on

Karamja. It involves gathering a handful of different

Trufitus Shakaya, in order for him to perform a ritual to communicate with the island's gods.

First off, head to the small village of

fairy ring ckr places you southeast of the village). Talk to

Trufitus, a native found in a small house a short distance northeast of the main village area. Ask him where everyone is, and he says that they've left the village.

Ask him about how you can help, and he tells you that he needs several

herbs to mix a

potion so that he can commune with the Gods. Tell him that you'll give it a try.

Note: You cannot collect all of the herbs at once. You will need to go back to talk with Trufitus each time.

The first herb that

snake weed, and it apparently grows near water. Head south of the village, past several level 44

tribesmen, and then west towards the water. Near the ocean should be a Marshy Jungle Vine, so search it to get a

grimy snake weed (might take 1–5 minutes, with a significant increase in speed as your

Herblore level increases), which should be cleaned before talking to Trufitus again. Bring this back to Trufitus, and he should give you another clue.

Trufitus' hut until you reach a cliff, and then head east to a peninsula (marked on the map by an

agility shortcut) with several palm trees on it, and level 46

Harpie Bug Swarms (they will attack you the entire time you're searching for the herb and can easily kill an unwary lower levelled player). Search a palm tree to find a

grimy ardrigal, clean the herb. Bring this herb back to Trufitus.

The next herb required for the potion just happens to grow well in areas that have recently been burned by fire, like a campfire. Go south of the village, and on the southern side of the fires should be an area of scorched earth. Search it to find the

grimy sito foil. Now, clean the herb and give to

This type of herb is commonly found clinging onto rocks that are constantly disturbed, much like a mining site. Head southeast of the hut until you reach a group of rocks and search an empty one to find the

grimy volencia moss. Again, clean the herb and give it to

Fairytale I - Growing Pains take an extra volencia moss as you may need one for the quest.

rogue's purse, and it can be found north of the village. Just head back to the cliffs to the north and then run around them along coastline until you reach a pile of rocks. Search them and enter the cave. Once inside the cave, run south past the level 53

Note: Consider collecting an extra rogue's purse if you plan on completing

Zogre Flesh Eaters to save the extra trip.
Note: Make sure not to return a rogue's purse dropped by a Jogre or Tribesman, or

Trufitus will tell you that he needs a fresh one.
Note: Killing a Jogre in this dungeon is a task for the Karamja easy diary.
Return to Trifutus with the final cleaned herb to complete the quest. 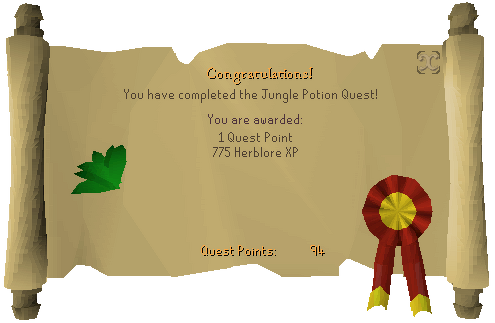 Completion of Jungle Potion is required for the following:

Doing this quest immediately after the "Druidic Ritual" quest will get you to 1,037

experience and level 9 Herblore (and 117 Herblore experience away from level 10 Herblore).