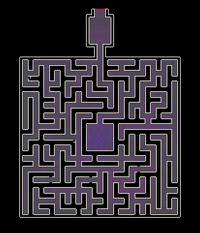 The maze is heavily guarded by traps and powerful stone guardians, with many dead ends. In the centre of the maze, a plinth can be found with one of Robert's dragon key pieces. Afterwards, players may use the plinth to return to the beginning of the maze.

In the south-west corner of the maze, in the third dead end from the left, a skeleton can be searched to obtain Malumac's journal.

The creator of the temple remains unknown, though it is known that it was built before the God Wars, as Skotizo led an expedition under Zamorak's orders to take an artefact from the temple's centre. With the artefact gone, Robert the Strong placed one of his dragon key pieces here later during the Fourth Age.

Retrieved from "https://oldschoolrunescape.fandom.com/wiki/Karamjan_Temple?oldid=8689084"
Community content is available under CC-BY-SA unless otherwise noted.