Start a Wiki
RS
This article is about the greegree that transforms the user into a Karamjan monkey. For the other types, see Greegree.

A magical talisman in the shape of a Karamjan monkey head. 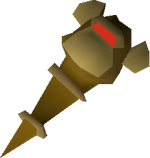 The Karamjan monkey greegree is used for transforming into a Karamja type monkey at the Ape Atoll island. To make a greegree, a player must take a Monkey talisman and monkey bones or corpse to Zooknock, who can be found at the very end of the Ape Atoll Dungeon.

When in the monkey form, all monsters on the Ape Atoll island become non-aggressive. This effect is only in place on Ape Atoll as Zooknock cannot use his magic over long distances. However, for reasons unknown, it can also be used at the Ardougne Zoo. Be aware that a greegree may not be wielded while in combat.

The greegree is used in the Monkey Madness I quest and is also useful in the Recipe for Disaster quest. At the very start of Monkey Madness, players will only be able to obtain a Monkey talisman by talking to the crying child in the house to the west of the monkey settlement when wearing the M'speak amulet. When they have had the greegree charged by Zooknock, additional Monkey talismans can be bought from the Tutab's Magical Market for 1,000 coins each.

There are mahogany and teak trees in the jungle outside Marim on Ape Atoll. With the enchanted greegree equipped, the creatures on the island will not be aggressive. The zombie monkey greegree (using the bones from the zombie monkeys in the dungeon) is very slow (you cannot run when using it).

You will need to wear the M'speak amulet to speak monkey. The greegree may be used in the Ardougne Zoo after the quest, but there are restrictions on where players may travel as a monkey.

Retrieved from "https://oldschoolrunescape.fandom.com/wiki/Karamjan_monkey_greegree?oldid=8688995"
Community content is available under CC-BY-SA unless otherwise noted.