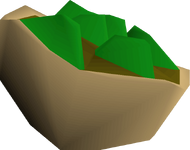 Kebabs are a camel meat delicacy which can be purchased in Al Kharid and East Keldagrim for 1 coin each, or at Pollnivneach for 3 coins each. The Drunken Dwarf random event may also grant the player a free kebab and beer.

Kebabs cannot be made through the Cooking skill.

Unlike normal food which restores a fixed amount of Hitpoints, kebabs have varied healing quantities when consumed. A player with 90–99 Hitpoints can expect to be healed 11 health on average, and each 10 levels of Hitpoints lower will heal about 1 less.

Retrieved from "https://oldschoolrunescape.fandom.com/wiki/Kebab?oldid=8687664"
Community content is available under CC-BY-SA unless otherwise noted.