Old School RuneScape Wiki
Register
Don't have an account?
Sign In
Advertisement
in: Articles in need of cleanup, Cities, Locations,
and 3 more

Tale of Keldagrim, Land of the Dwarves 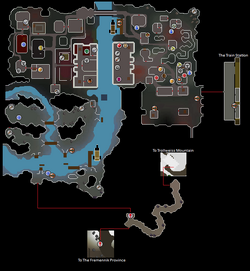 Keldagrim is the city of the dwarves. Its name is derived from the River Kelda flowing through the city, and it is a massive underground dwarven city accessible from the tunnel entrance east of Rellekka. It is first accessed through The Giant Dwarf quest. The entrance of Keldagrim is near Rellekka. This is also the home of the Blast Furnace and the Rat Pits. After the completion of Another Slice of H.A.M, players can use the Dorgesh-Kaan - Keldagrim Train System to travel between the city of Dorgesh-Kaan and Keldagrim.

Including the mines to the south and the Arzinian Mine within those mines, Keldagrim is one of the largest dungeons in all of RuneScape. The only other dungeons that rival its size are Varrock Sewers, Taverley Dungeon, the Underground Pass, Dorgesh-Kaan, Brimhaven Dungeon, and the God Wars Dungeon. Despite its size and large array of features, Keldagrim is rarely visited by the vast majority of players. The exception to this is on World 358, which has been declared the official Blast Furnace world. Although the city often lacks players, it has no shortage of non-player inhabitants - Keldagrim boasts one of the largest NPC populations of any city in the game along with Dorgesh-Kaan, which is also seldom visited.

The most common method of getting to Keldagrim is by using the trapdoor located in the north-west of the Grand Exchange, to take a mine cart (starting The Giant Dwarf quest is required).

There is a mine cart system in Southeastern Keldagrim that can be used to travel to and from the underground White Wolf Mountain passageway or the Dwarven Mine under Ice Mountain for a fee of 100 or 150 coins respectively.

Players can use Fairy Ring code dks to teleport right next to the entrance to Keldagrim.

Players can also use an enchanted lyre, and then walk northeast around the outside of Rellekka to reach the entrance to Keldagrim.

After completing Another Slice of H.A.M., players can use the Dorgesh-Kaan - Keldagrim Train System.

Players can also use the Minigame Teleport for Blast Furnace. You need to have started the The Giant Dwarf quest.

Keldagrim plays host to more shops than any other city in Gielinor. As such, the city is a major attraction for those wishing to buy things. With items ranging from kebabs to marble blocks, Keldagrim is an excellent location to begin searching for an item. It hosts a wide range of shops, and is well-known for its vast assortment of available goods.

Gunslik's Assorted Items is a general store run by Gunslik, selling supplies that should come in handy during adventuring. Its stock is somewhat similar to the general stores in Karamja.

Pickaxe-Is-Mine is a mining shop run by Tati and Sune, which sells every type of pickaxe with the exception of iron and dragon. This store is very convenient because it allows players to purchase newer, more effective pickaxes while training mining in the city. Be warned, though; the shopkeeper, Tati, is a little hard of hearing, so try to speak loudly.

Keldagrim Stonemason, run by the Stonemason, is the only stonemason currently found within the game. The store sells mid-to-high-level construction materials, ranging from the basic blocks of limestone that surround the city to incredibly rare magic stones. It is possibly the most expensive store in RuneScape, and can empty players' pockets very quickly. There is also a fire inside the stonemason's shop that can be used to prepare most foods.

Quality Armour Shop is shop run by Saro which sells a variety of melee armour and shields. There is also an anvil in here that can be used to smith, and its close proximity to The Bank of Keldagrim allows for very fast smithing.

Quality Weapons Shop is run by Santiri and sells a variety of ranged and melee weaponry that players of all levels can make use of.

Agmundi Quality Clothes is a clothes shop run by Agmundi. Agmundi gets most of her stock from Vermundi, her sister in Keldagrim East. As such, she is the first destination for dwarves in need of new clothing. The clothing sold here is much too small for humans to comfortably wear, although some players wear it anyway.

Vermundi's Clothes Stall is a clothes shop run by Vermundi. Most of Vermundi's merchandise is sent to her sister Agmundi in Keldagrim west, so the stock here is somewhat lacking. Although this stall has a thieve option, it cannot actually be stolen from.

Vigr's Warhammers is a weapon shop run by Vigr which sells a variety of warhammers. He doesn't appear to think much of humans, and is a supporter of the Red Axe, although he later denies it. There is a sink, fireplace, and more importantly, a furnace, in this room that, as of yet, cannot be used by players.

Crossbow Shop, run by Hirko, is one of only three crossbow shops in the game. It holds the same stock as the other crossbow shops: a variety of crossbow limbs and crossbow stocks. This stall is notable because it can be thieved with level 49 Thieving and because Hirko also sells Bolt pouches. If stealing from the stalls in Keldagrim, it is highly recommended you wear crush-resistant armour to defend against the Black Guards' attacks.

Carefree Crafting Stall is a crafting shop run by Nolar. It stocks basic crafting materials, and can be stolen from with 5 thieving.

Green Gemstone Gems is a gem shop run by Hervi. All of the gems in this store are player stocked only. This stall can be stolen from with 75 thieving. Stealing from this stall is a requirement for the Fremennik Hard Diaries.

Keldagrim's Best Bread is a food shop run by Randivor that sells a variety of baked goods. It can be stolen from with 5 thieving and respawns twice as slow as the cake stalls in Ardougne, but gives twice as much experience.

Silver Cog Silver Stall is a shop run by Gulldamar which sells unstrung symbols. This stall can be stolen from with 50 thieving.

Armour Store is a shop run by Jorzik which contains only player-stocked mithril, adamant and rune armour. It can be found downstairs in the Blast Furnace. The items in this store are player stocked only; who sometimes sell their smithed goods here. The shop removes its stock very slowly, so anything sold to the shop will usually remain there for a while.

The Ore Seller is a mining shop run by Ordan found downstairs in the Blast Furnace. This shop stocks ore used for smithing. The base stocks of all ore types are 100. The shop is restocked by a dwarf that constantly enters the room and gives a large number (around 30) of one type of ore to the shop. Ordan can also unnote ore, for a fee.

Kjut's Kebabs, run by Kjut, only sells only one item: kebabs. These can be bought for a single coin and are excellent food when stealing in the marketplace. Be warned, though; when consumed, kebabs can have somewhat random effects, and while they can heal a very large number of hitpoints, they can also temporarily lower stats.

The Laughing Miner Pub, run by Blandebir, holds formenting vats upstairs where players can brew their own ales. There is a barmaid of the first floor that sells stews for 20 gp each and beers for 2 gp each. A staircase inside the pub is also entrance to the Keldagrim rat pits.