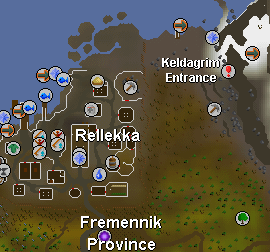 The Keldagrim entrance mining site, also known as the Fremennik Province mine, is located east of Rellekka near the Keldagrim entrance. It has nine iron rocks and two mithril rocks. The mine is quite far from a bank, with the nearest ones being in Keldagrim via a cave to the north, and Zanaris via the fairy ring on the snowy hill to the north-east. Players who have completed the Easy Fremennik Diary can also ask Peer the Seer to deposit their ores for them. This mine is rarely used, thus making it a good spot for players who do not want competition.

Retrieved from "https://oldschoolrunescape.fandom.com/wiki/Keldagrim_entrance_mine?oldid=8688262"
Community content is available under CC-BY-SA unless otherwise noted.