Keldagrim Coal Mine, Blast Furnace Mine 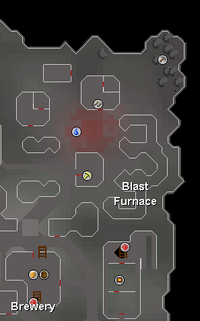 The Keldagrim north-east mine is a mine located in the far north-east corner of Keldagrim, the subterranean capital of the Dwarven Realm. The mine contains nine coal rocks, and it is most well-known for its close proximity to the nearby Blast Furnace. To access Keldagrim, and thus the mine, players must have started The Giant Dwarf quest. However, players do not need any of the quest's requirements to start it, meaning the mine is essentially available to everyone.

According to Bentamir, a poor dwarven miner who lives in a small hollow near the mine, he and other miners employed by the Consortium occasionally use the site as a means of extracting coal to support the city. Unlike most of the mines that support Keldagrim, the north-east mine is fairly small and unpopulated. Although Bentamir speculates that humans are by law probably not meant to use the mine, its low use, location on the poor east side, and small size mean that its use is not carefully regulated by the Consortium.

The Keldagrim north-east mine is located in the north-eastern-most corner of Keldagrim city. Players arriving in the city by way of the Dwarven Boatman's steamship on the River Kelda will find the mine to the east.

Players who have started The Giant Dwarf can also reach the area quickly by taking the mine cart network from either the Grand Exchange in Varrock, the Dwarven Mines beneath Ice Mountain, or the tunnel beneath White Wolf Mountain (provided the Fishing Contest quest has been completed). The Keldagrim mine cart hub can be found south of the mine.

Additionally, players who have completed Another Slice of H.A.M. may take the Dorgesh-Kaan - Keldagrim Train System to and from Dorgesh-Kaan free of charge. The Keldagrim train station can be found on the eastern wall of the Keldagrim cart hub.

The Keldagrim north-east mine is used most frequently by players smithing at the nearby Blast Furnace. Players wishing to be more self-sufficient often mine here so they can avoid buying coal from other players or buying it from the Ordan, the Ore Seller at the Blast Furnace. The mine can also be used in conjunction with other mines in the city, including the Keldagrim south-west mine, which contains a variety of ores.

Players that wish to use the mine without using the Blast Furnace can store the coal at the bank on the city's west side. The bank can be reached by crossing the River Kelda to the west, and then turning south at the Keldagrim Library. Alternatively, the mine cart network can be used to reach the Grand Exchange's banking facilities fairly quickly. The Dorgesh-Kaan bank and furnace are also fairly close to the train system's station in Dorgesh-Kaan.

Keldagrim also plays host to a variety of other amenities that players mining or smithing in the area may find useful, including five anvils, a pickaxe store, a gem stall, and a general store.

Retrieved from "https://oldschoolrunescape.fandom.com/wiki/Keldagrim_north-east_mine?oldid=8688225"
Community content is available under CC-BY-SA unless otherwise noted.