King's Ransom is the final

Break the window on the east side of the mansion, and you shall be inside.

(It is possible to skip the following section and go to the trial immediately. Just walk down the stairs in the courthouse, and the trial will begin.) Return to the mansion, and once again, enter via the broken window. The purpose of this trip is to learn what the various servants will state during the trial.

After being knocked out by

Morgan Le Faye, you will wake up in a jail with Arthur's Knights and

Note: If you happen to click on the vent again, the knights will lift you out of the cell. To continue, make your way back to Camelot and click on the gates to be teleported back into the cell by Morgan Le Faye.

Note: If you choose the wrong box, you will be teleported outside South-west

Ardougne. To continue the quest, you will have to walk back to

Keep Le Faye. When you try to open the door,

Morgan Le Faye will appear and will teleport you back to jail. There, you don't need to solve the door puzzle again—you just have to open the door and walk back to the top floor.

Note: Even if you already have the Animate scroll, you will still need to go talk to Wizard Cromperty, or your player will not be willing to cast the spell on King Arthur.

Tip: Get the bronze med helm and iron chainbody in

Draynor Manor and at

Falador respectively if you still need them. 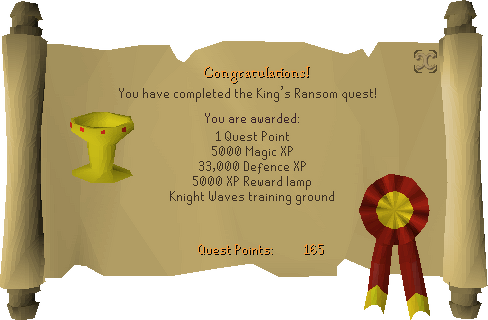