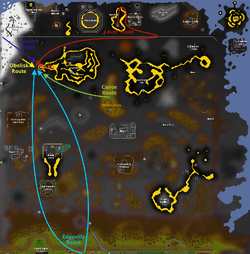 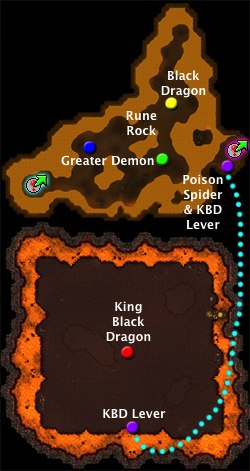 The King Black Dragon Lair, abbreviated as the KBD lair, is a multi-combat area, allowing groups of players to fight him simultaneously. The lair can be accessed via the western entrance to the Lava Maze Dungeon in level 42 Wilderness near the Lava Maze. (WARNING: Watch out for PK'ers!) The dungeon may be accessed via a ladder in a fenced area on the west end of the Lava Maze containing four lesser demons. The ladder leads to an area with poison spiders, and a lever which will teleport the player to the King Black Dragon's lair. The lair itself isn't in the Wilderness, but players are in the Wilderness until they pull the lever. As with all Wilderness levers, if a player is teleblocked, they can't pull the lever. As the lair itself is not considered the Wilderness, players can use any means of teleportation to leave.

The quickest way to reach the KBD lair is by rubbing a burning amulet and teleporting to the Lava Maze.

Retrieved from "https://oldschoolrunescape.fandom.com/wiki/King_Black_Dragon_Lair?oldid=8697221"
Community content is available under CC-BY-SA unless otherwise noted.