A knight from a far-off kingdom. 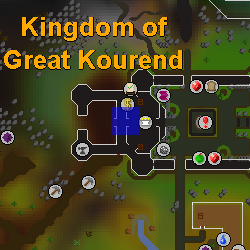 Knight of Varlamore is a knight located on the 1st2nd floor[?] of the Kourend Castle.

If asked about himself, he will state he is from "the shining kingdom of Varlamore", and that he travelled to Great Kourend for a mission. However, he will not tell the player further about his intentions. According to him, the Kingdom of Varlamore is located to the south-west, beyond Mount Quidamortem.

Retrieved from "https://oldschoolrunescape.fandom.com/wiki/Knight_of_Varlamore?oldid=7774908"
Community content is available under CC-BY-SA unless otherwise noted.