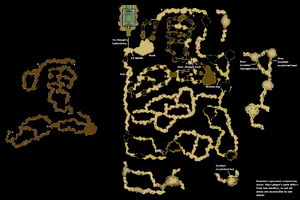 Kruk's Dungeon is a large labyrinth whose entrance is hidden under jungle grass west of Marim on Ape Atoll.

This dungeon is unique in that the navigation of it during the quest is different for each player. Some may have to navigate through a series of agility obstacles or run through hordes of Maniacal Monkey Archers and Maniacal monkeys.

At the end of the dungeon is where players will fight Kruk to progress through the quest. North of the initial entrance, monkey bars can be seen and can only be used once the player has a Kruk monkey greegree.

Retrieved from "https://oldschoolrunescape.fandom.com/wiki/Kruk%27s_Dungeon?oldid=8689481"
Community content is available under CC-BY-SA unless otherwise noted.