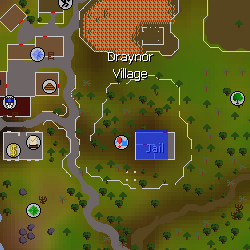 Lady Keli Raven is a bandit leader and the main antagonist in the Prince Ali Rescue quest. She is found in the jail area (usually inside the jail proper but sometimes within the jail's compound) in Draynor Village.

Lady Keli kidnapped Prince Ali and had plotted to ransom for the prince's release. Keli is vain and arrogant - she likes showing off and being praised, and claims to have killed three men before she was six (there is no evidence to support this claim apart for her word). The player exploits these traits to outwit her - tricking her into showing the key to Prince Ali's cell, which allows the player to get a clay imprint and make a bronze copy of the key. The player incapacitates her head guard, Joe, before tying Keli up with a rope, locking her in a closet and freeing Prince Ali.

Once the player has completed the quest, speaking to her will result in being attacked by one of her jail guards.