Before/during quest: It's tragic to see a lady cry.

After quest: She looks healthy, wealthy and happy. 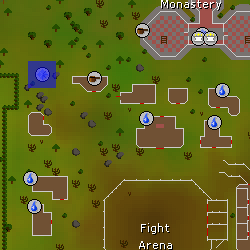 Lady Servil is a minor noble of Kandarin, the mother of Sammy Servil and wife of Justin Servil. All three are characters in the Fight Arena quest, in which the player must rescue both Justin and Sammy from the clutches of General Khazard, a maniacal Mahjarrat who delights in fights between his creatures and unfortunate Slave fighters.

Lady Servil is located just outside the northeast corner of the hedge-maze surrounding the Tree Gnome Village, and is spoken to in order to begin the quest. You may also need to talk to her about a clue scroll, and some coordinate clues lead to the general area she is in.

Retrieved from "https://oldschoolrunescape.fandom.com/wiki/Lady_Servil?oldid=7774986"
Community content is available under CC-BY-SA unless otherwise noted.