North-west of the Lava Maze 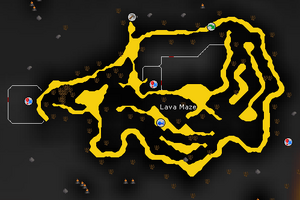 Located north-west of the Lava Maze in level 46 Wilderness, the Lava Maze Runite Mine is the only mining site in free-to-play worlds with available runite ore to be mined. Therefore, the rune ore is rarely left spawned, as rune miners often time the spawns and wait for the ore to spawn in anticipation. The mine is located north of both the Bandit Camp Mine and the Lava Maze in the Wilderness. There are two rocks here which contain rune ore. Although the area around the rune rocks is crawling with aggressive deadly red spiders, players will rarely be attacked by the spiders when standing next to the runite. World switching is useful here to fill the inventory with ore, as it takes 12.5 to 25 minutes for the runite to respawn.

Player killers are often found around this mine, as foes cannot teleport until they reach a Wilderness Obelisk, the Mage Arena, or level 20-30 Wilderness. To complement this, it is easy to attack and kill unsuspecting players who are looking for runite ore to mine as they often forego armour in order to reduce weight and item loss upon death. To reduce the risk of being killed while mining, it is recommended that players bring a few pieces of high-healing food, such as sharks.

A common practice among miners at this mine was the use of "scouts", low level accounts used to determine the risk and availability of rune ore in the mine. If it was considered safe enough, the player would return on their main account to mine the ore. Scouts are very important when mining rune as they help the miner avoid being surprised by PKers. Players shouldn't have anything on their scouts other than food, and a scout should be kept east of the rocks as far as the miner can move without losing sight of it.

If attacked by a player killer, run westward and make sure you run directly through the nearby deadly red spiders, and then run all the way to the ice giants and ice warriors. Next, run south until you see a high concentration of ice warriors. The PKer will get tired and log, or you can run to them and go a bit north and log out.

Always have your staff equipped, and use Protect from Melee unless your enemy is not using Melee. In this case, use the proper protection prayer based on your foe's attacks.

Retrieved from "https://oldschoolrunescape.fandom.com/wiki/Lava_Maze_runite_mine?oldid=7775077"
Community content is available under CC-BY-SA unless otherwise noted.