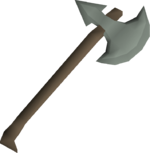 The leaf-bladed battleaxe is one of three melee weapons used to harm turoths and kurasks, the others being the leaf-bladed spear and sword. When fighting these monsters with the battleaxe, it will deal 17.5% more damage.

The axe requires an Attack level of 65 and a Slayer level of 55 to wield. It is dropped by kurasks located in the Fremennik Slayer Dungeon.

The leaf-bladed battleaxe has the highest strength bonus out of all one-handed melee weaponry, exceeding the dragon battleaxe, having a higher slash and crush bonus than its dragon counterpart. In addition, unlike standard battleaxes, the leaf-bladed battleaxe exhibits a faster attack speed of 5, instead of the usual 4, resulting in significantly more damage per minute.