Drop (You drop the boot on the ground and lose sight of it.)

One of a pair I assume. 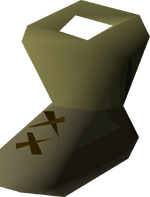 The left boot is a quest item used during the The Giant Dwarf quest. A player can steal the boot from Dromund by taking it from the table near the door when Dromund isn't looking. The matching Right boot can be obtained by using Telekinetic Grab through the north window.

Once the player has obtained both boots in their inventory, they automatically turn into Exquisite boots and can be delivered to Riki the sculptor's model.

Should the player attempt to equip just the left boot, the avatar responds, "What, wear just one boot? Besides, the boot is too precious for that." Attempting to equip both provokes, "I shouldn't wear these boots, I don't want anything to happen to them before I bring them to the sculptor."