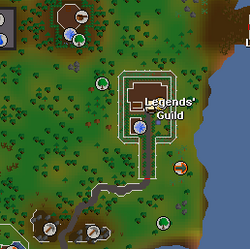 The Legends' Guild mining site, also called the East Ardougne Mine, is located just south-west of the Legends' Guild and east of Ardougne's east entrance. Both places have a bank that can used for depositing ores. It is one of the six mines in RuneScape that contains three iron rocks close together, with the other five being the Piscatoris mine, Al Kharid mine, Lovakengj mine, Wilderness Resource Area, and Mining Guild, where three iron rocks can be mined without moving, thus ideal for power levelling. It can be accessed using Fairy ring code BLR and then walking south and slightly west.

The mine is often used to mine iron ore and coal to make steel bars at any good furnace.

There are also several grizzly bears wandering around the mining site, which can be dangerous to players with a Combat level under 43.