The Giant Dwarf, Between a Rock...

He takes care of the library and its many books. 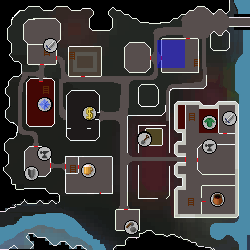 Hugi the Librarian is a dwarf that works in the Keldagrim Library. Hugi, along with his assistant, help to manage the library, in which many important documents concerning the history of Keldagrim are kept.

Hugi plays a minor role in several quests, including The Giant Dwarf, Between a Rock.... His name is taken from a word in the ancient dwarvish tongue that literally means "personification of thought."[1]